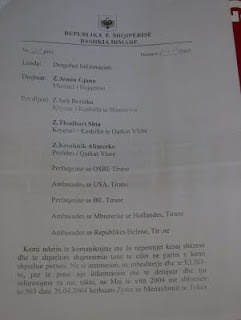 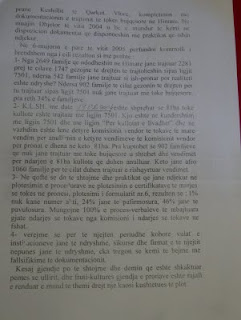 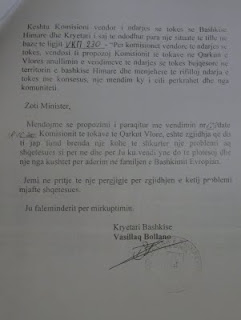 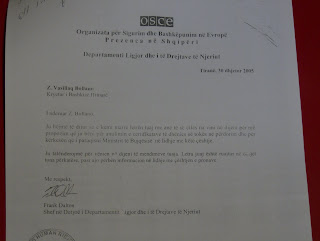 Why The Himara Community, is Against Property Registration Process?

Documents which evidence that not only The Himara Community and Coastal Association, but also the Municipality of Himara and OSCE, , have been against instituting of law 7501.

Posted by Stavros Markos at 4:57 AM
Email ThisBlogThis!Share to TwitterShare to FacebookShare to Pinterest

US Department of State released the 2010 human rights report for 194 countries of the world. The report gives an overview for each country during 2010. 25 pages of this document were referred to Albania.

Mentioning the Parliamentary Elections of 2009, which, according to OSCE, were better than the previous elections, but didn’t achieve the standards.

Related with the financing of political parties, the document says that this case remains largely obscure. Corruption and impunity still continues. The report says that government corruption remained a serious and unresolved problem.

Discrimination against women, children and homosexual persons is also a big problem. Trafficking of persons also remained a problem. As for the Roma community, the report mentions the National Action Plan 2010-2015, with a budget of 2.5 billion leks (14 million Euros).

Regarding the role of the media, the report writes that the government and the businesses influence very much and exert pressure against the media. Critics against the government may be open, private and without limit, says the report, but there are some exceptions. Some media have been under strong pressure for the taxes, because of their political convictions.

Again on the media, the report says that media were active, but nevertheless there have been direct and indirect pressures against them, including threatens against journalists.

The report says that the Police beats and mistreats their suspects during questioning and imprisonment.
Posted by Stavros Markos at 12:01 AM
Email ThisBlogThis!Share to TwitterShare to FacebookShare to Pinterest 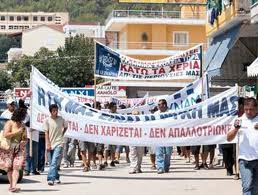 
Himara Region: The process of land registration, is to failure

"The Himara Community", states that the registration of lands in Region Himara based on Law 7501, should be boycotted

Photo: August 2008, Big protest in Himara for return of lands ad properties to people of Himara

OSCE and "Lorenzo Company" is preparing to enter to the second phase in Himara Region, that of land registration, no end yet, the registration of houses and property, while the process is scheduled to begin in September 2011.

Albanian Mafia, Italian and Russian, earnestly seeking the registration of land, based on 7501 law, with the help of the Albanian authorities.

OSCE Representative who is in charge of registration of property and land in Himara Region, visited Himara Municipality last week, and is expressed paradoxically, that "is satisfied by the progress of the process."

But "The Himara Community" and "The Coast Line Association" object registration, initially having properties which are not recorded by "Lorenzo Company. Regarding this fact, "The Himara Community" based in Tirana, Athens and Washington, said it would not recognize the official recording of OSCE, as long as such registration is based on Law 7501, which currently serves to the Mafia, not for community.

According to data from Himara Municipality, from the 2200 property recorded giving by the law 7501, 1900 are documents lot of problems, of which, 550 were taken from families that were not part of the former cooperatives regime, but have lived in cities, and nearly 700 families who lived in the countryside, have no property taken by this law.

The Pan Himariot Conference Held in December 2005, has declared that the property belong to himariotes without the Law 7501. The Himara Community, considers the process registration of lands including the Law 7501 failed.

The Pan-Himariote Conference gathered in Tirana, Albania, on December 16-17, 2005

Ø Respecting the will of the people of the region of Himara expressed through participation in this meeting of their representatives from Himara and all over Albania and through the virtual participation of the Himariotes throughout the world,

Ø Expressing their concern about the deep social, economic, environmental, cultural and demographic crisis of the region,

Ø Fully aware of the high potential for development of the region, donated generously by nature and God; and created and preserved and protected by generations of Himariotes through titanic efforts and investments done with sweat and blood not only in their motherland, but all over the world,

Ø Knowing and respecting the history, traditions and customs of this distinguished region “of pen and gun” that have lived the history “as falcons against the storm” and “opposing state power”,

Ø Looking with increasing concern the degradation that this region is undergoing due to neglect by all governments, which have never heard the region’s reasoned voice that always prefers consensus and lawful options for the solution of any issues

Ø Viewing with concern galloping corruption in the area of immovable property, and the incapacity of the law to stop the alienation of our ancestors' properties,

Ø Respecting primarily the will of the region expressed through an extended regional and national debate in which were invited the best intellectuals and the most active part of the region as well as the Ionian Riviera,

Ø Willing to contribute to the consensual solution of the major issues of concern that the region, like the rest of Albania, is faced with

- The increase of attention and care – lacking so far - from public institutions, in solving central issues that are of greatest concern for the region of Himara and the whole of the Ionian Riviera, which, according to most domestic and foreign experts are among the most favored for the development of both tourism and agro-business,

- Implementation of more development programs for the area especially in infrastructure such as roads, water, energy, treatment of waste, but also in health, education and culture - programs that will bring prosperity to the region and radiate in the development of our society as a whole,

- And above all, and all the energy possible, the respect for our right to have back our ancestral ownership without the Law 7501, respecting thus the morale, traditions and customs of our region, our country’s Constitution and international principles, as the Gordian knot for going back to normality, welcoming the missed dialogue with responsible institutions and the desired consensus as essential principles in solving the property issue, which is keeping all the region and the whole Ionian Riviera in knock-down situation, as a result of not understanding the specifics of the region and not listening of vox populi, by continuing the procedure already begun in two of the region’s villages,

- Halting the haemoragy of Himariote blood leaving their country of origin with sorrow and nostalgia; and the creation of the conditions for them to return to Himara, through the promotion of economic development and more specifically developing the tourism and agro-business, considered to be the means for the region’s revival and prosperity,

- Undertaking of immediate measures to stop the alienation of the rich biodiversity and natural-cultural heritage of the region that don’t belong only to Himara and the Ionian Riviera alone,

- Increase of and implementation of a functioning decentralization for all the Riviera region from Palasa to Nivica, as a single unit, due to their geographical-cultural-ethnographical-historical specifics,

- Development of tourism, aiming in the development of existing villages as very important monuments, in contrast with the efforts to build “colonial type” villages,

- Promotion of the participation of the community and local authorities in institutional dialogue that aim at the development of the area such as Local Authority for the Development of Tourism,

- Authorizes a special group elected by this meeting, to negotiate for all the above-mentioned issues with the local and central authorities and the other domestic and international partners

Posted by Stavros Markos at 12:35 AM
Email ThisBlogThis!Share to TwitterShare to FacebookShare to Pinterest
Newer Posts Older Posts Home
Subscribe to: Posts (Atom) 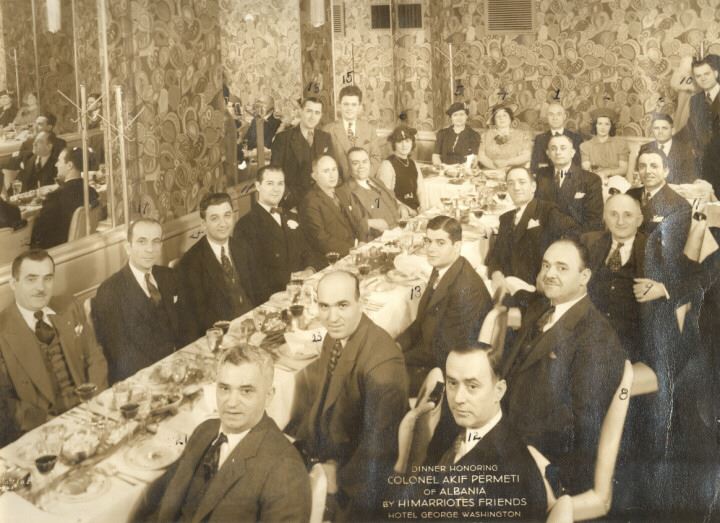 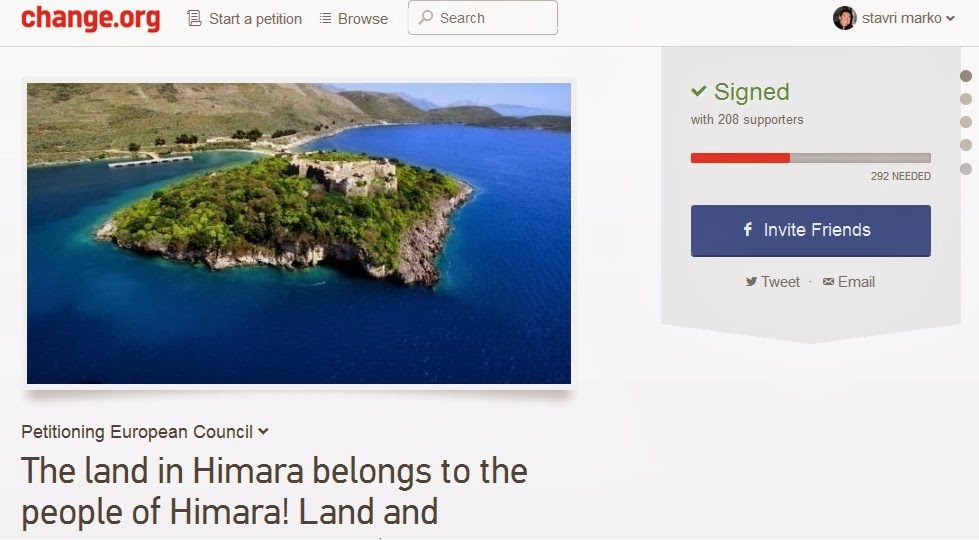 The land in Himara belongs to the people of Himara! Land and property registration NOW! Signe now this petition to the European Councile, for the registration of properties to the only and single eligible owner: the PEOPLE of Himara. 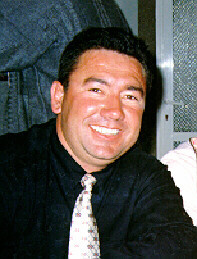 The Draft Development Plan in Municipality of Himara 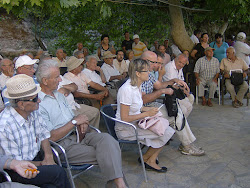 "The properties belong to our generations of Himara Region" Under the initiative of non-governmental organizations and especially the Coastal Association and the "Himara Community", today in Potam, in Drymades, the protest rally was organized for the owners of Himara Region "The Properties belonge to Himara legal generations." The meeting, which is held annually in Drymades (Dhermi), force was asked to respect the Constitution of Albania for the legal inheritance of property and non-law 7501, lecture held by the President of the Coastal Association Niko Nesturi and many other representatives. In protest were also invited representatives of the OSCE, Mayor George Goro, the company representatives, "Lorenzo & Compani" who perform registration, U.S. citizen originally from Himara and many immigrants who live and work in Europe especially in Greece. With unanimous voices by protesters, decided by a resolution to urge the Albanian Government and International Institutions, to observe the Constitution of Albania as a legitimate claim on the property total return to Himara legal inhabitantes and non-registration of property placed in service by the albanian Mafia.

Attention! Himara Region: The process of land registration, is to failure

"The Himara Community", states that the registration of lands in Region Himara based on Law 7501, should be boycotted. OSCE and "Lorenzo Company" is preparing to enter to the second phase in Himara Region, that of land registration, no end yet, the registration of houses and property, while the process is scheduled to begin in September 2011.Albanian Mafia, Italian and Russian, earnestly seeking the registration of land, based on 7501 law, with the help of the Albanian authorities. In the end of the year 2010, a series of non-governmental organizations of the Coastal regions, from Himara, Saranda and Lukova, also from USA and Greece, have sent a petition to OSCE, to respect the constitutional obligation of the process of registration of property in Ionian coast, on the basis of the documents to legitimate ownership, not including the Comunist Law 7501.

Himara People want to have generation properties without the Law 7501

February 2007, Activity of The Himara Community

The property issue is one of the important objectives of the Himara Community which menaces our future in the region.

The Himara Community members with the Mayor of Himara Municipality Vasil Bollano, during meeting with World Bank in Tirana, february 2006

"The Himara Community", "The Himara Union" and "Costal Association", during a massive protest for the rights of properties in Himara Region.